Forensic nursing investigates criminal sexual or physical assaults and accidental deaths, and acts as a bridge between the health care system and the criminal justice. Thus, a forensic nurse is a unique qualified medical person trained to observe, document and preserve the evidence of the incident or happening for the subsequent public or legal proceedings. Taking photos and making videos of the incident and injuries are very important to aid the legal and civil proceedings. The major subspecialties of forensic nursing include sexual assault investigations, forensic psychiatric nursing, accidental death evidence and medical-legal consulting. At the end of this course you will be able to understand the responsibilities of a forensic nurse and how to observe, recognize, document and preserve incidental or accidental evidence.

Forensic nursing is the newest area of nursing that refers to the application of nursing care to public or legal proceedings [1]. It aims at caring for the victims while collecting the evidence for legal purposes. In fact, forensic nursing has been established to act as a part of the legal system. Forensic nurses investigate and evaluate the potential causes of morbidity and mortality in various medico-legal settings. They collect evidence from the perpetrators and the sufferers or victims to be testified in the court of law as a fact witness or expert witness.

Forensic nursing investigates criminal sexual or physical assaults and accidental deaths, and acts as a bridge between the health care system and the criminal justice [1]. Thus, a forensic nurse is a unique qualified medical person trained to observe, document and preserve the evidence of the incident or happening for the subsequent public or legal proceedings. Taking photos and making videos of the incident and injuries are very important to aid the legal and civil proceedings. The major subspecialties of forensic nursing include sexual assault investigations, forensic psychiatric nursing, accidental death evidence and medical-legal consulting.

At the end of this course you will be able to understand the responsibilities of a forensic nurse and how to observe, recognize, document and preserve the incidental or accidental evidence as a fact witness for the legal and civil proceedings. 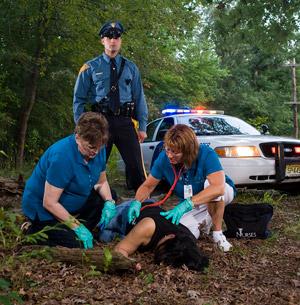 Most often, accident and emergency (A&E) department is the first place where the forensic patients (victims) present or report and thus, a handful of evidence can be collected in A&E with the help of trained forensic staff. Collection of forensic evidence is considered vital for the provision of medical treatment. Although life-saving and emergency procedures are more important than evidence preservation; however, recognition of severity of the injury or incident and the extent of damaged quality of life are of prime importance in order to bring justice for victims or injured.

Evidence preservation is a crucial step of forensic nursing in order to support successful legal proceedings. It is necessary to keep all evidence intact until proper collection and documentation is completed. While collecting evidence, use of force, assaulter’s identity and his/her relations with the victim are noted for essential law enforcement. Similarly, all statements made by the victim are documented regardless of his/her medical care. Untrained staff, mishandled course of treatment, and passing over the chain of custody may lead to limited law enforcement and justice provision. 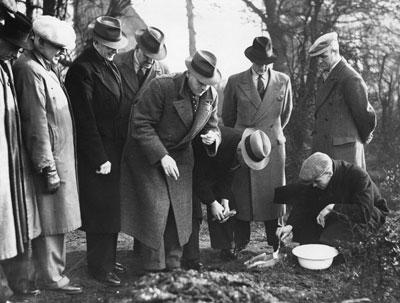 Incidence: The first step in evidence preservation is to identify the nature, origin and time of the incident/accident. Nature of the happening may be physical, sexual or emotional. Origin of the incident may be neglect, accident, torture, violence, drug induce or poisoning. Time of the happening or incident is very important as the evidence may deteriorate with the passing time. For example, saliva for DNA sample and sexual assault examination should be performed within 48 hours and 96 hours, respectively.

Clothes: Although the clothes of the predator and the victim are not the part of medical forensic exam; however, these are considered as critical forensic evidence. As the patient approaches A&E department, all the items of clothes must be located and noted; especially the cuts and tears to the clothes should be documented and packed in the bags accordingly. The clothes (especially the underwear) of sexually assaulted patient are retrieved with law enforcement for the purpose of medico-legal proceedings. 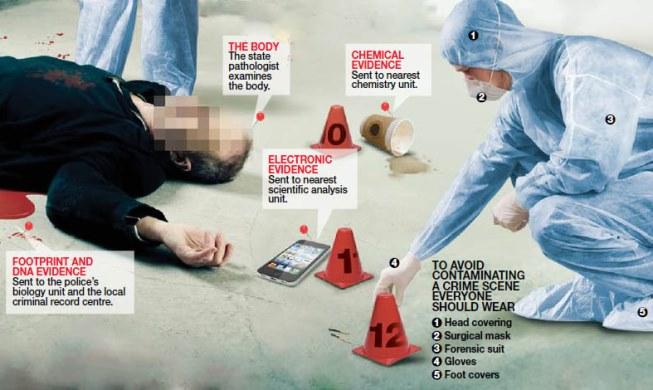 Skin: Remember, most often skin of the patient carries vital evidence in the form of cuts, violence or bite marks and contamination. Therefore, it should be unwashed until the forensic collection and documentation is completed. The forensic nurse should wear proper medical and protective equipment to avoid contamination while collecting the swab samples from the patient’s body. He or she should wear gloves and masks so that the samples should not be contaminated while coughing/sneezing or the germs or toxic materials should not be in-contact with the collector.

Stomach Contents: In case of food, beverage or drug poisoning, stomach contents or vomitus are preserved for the biochemical examination. It will reveal the type of chemical or poison given to or taken by the patient for suicidal purpose. 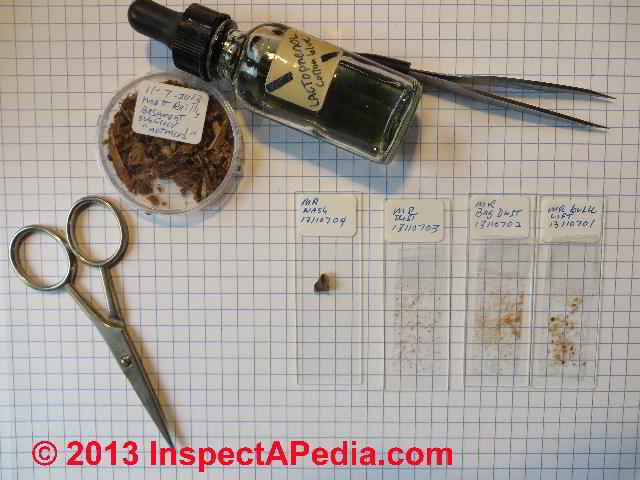 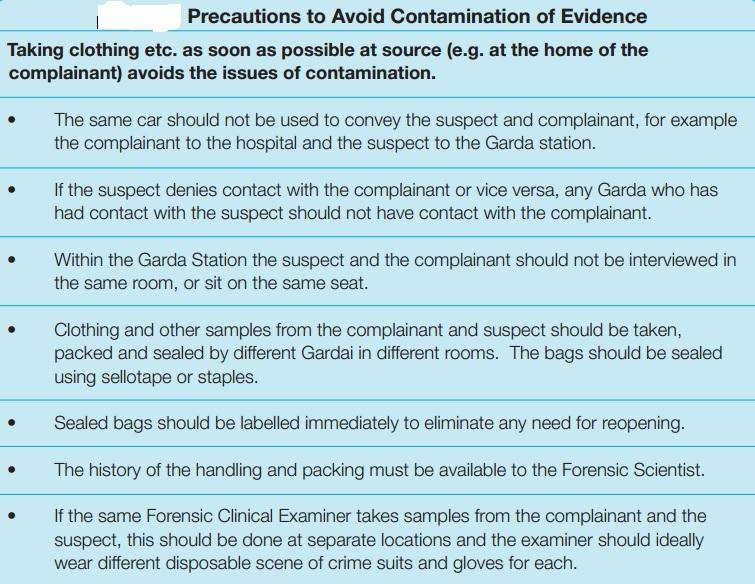 History and examination of the victim are key sections of a forensic proceeding. Careful history and proper examination leads to successful law or local proceedings to offer the justice. Law enforcement depends on the nature and severity of the incident, accident or assault. In A&E, a forensic nurse may interact with the following forensic cases:

For nature of incident or assault, different parts of the body are given importance. It is important to note the information provided by the transport personnel and the information gathered during an interview to reach particular detail; however, it should not distract or detour conducting a thorough examination. One portion of the physical examination is the patient’s physical appearance at presentation. The patient’s ability to remember the incident, response and cooperation are also noted. 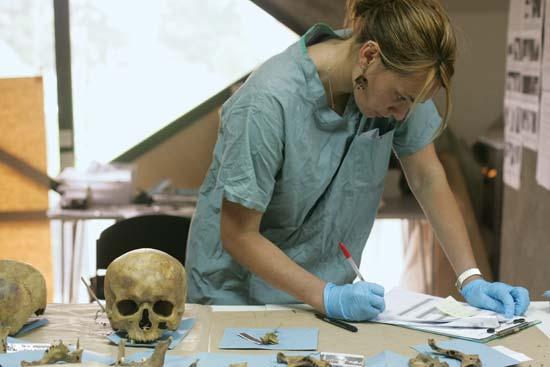 One of the important forensic cases is the reporting of sexual assault as 200000 and 125000 sexual assault cases were reported in 2008 and 2009 respectively in United States [3,4]. For the purpose of prosecution of the offenders, A&E services and physicians’ documentation play key roles. Therefore, it is imperative for A&E staff to know and understand the examination of sexually assaulted patients.

Sexual assault examination is an important examination to prosecute the criminal or offender. Before starting the examination of a sexually assaulted patient, it is necessary to know whether the examination was initiated by court/law or the assault has yet to be reported. It is the duty of health care professionals to report and document all the sexually assaulted patients. If the court has already initiated the investigation and asked for examination then certain questions may be skipped to avoid extra stress to the patient. For instance, description of the suspect can be skipped; however, it should not affect the certain forensic examination. 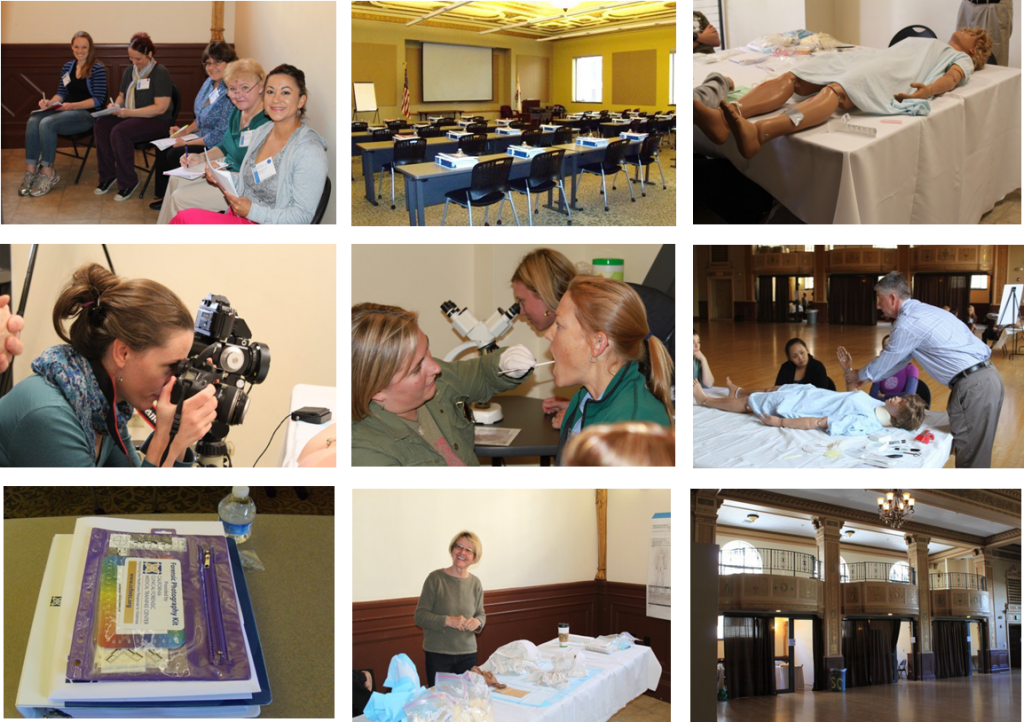 It is not easy to ask questions or discuss the event with the sexually assaulted patient; however, it is necessary for legal or public proceedings. For instance, an offender can be blamed for sodomy even if his act did not result in actual penetration. Therefore, a comprehensive list of questions should be asked to reach a definite point. While taking history and performing sexual assault examination, following questions are asked: 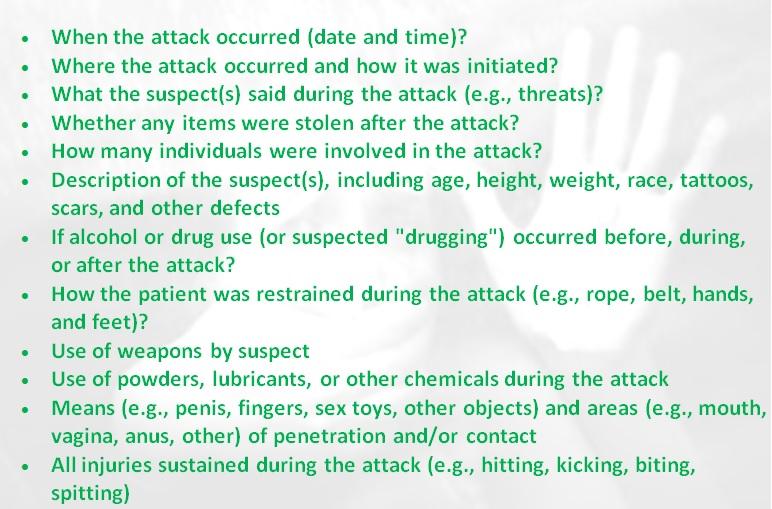 Also, it is vital to know whether ejaculation occurred or not; if it happened to occur, the location should be identified. As well as fluids and blood samples are helpful in DNA testing. If more than one offender committed the crime, all the perpetrators are identified with their act of harm. Remember, a consent form must be filled by the patient or the attendant before embarking on the forensic examination.

Usually, skin is the first organ to be examined in sexually assaulted victims. Areas are identified and scanned first with visible light and then with ultraviolet Wood’s lamp to visualize possible semen drops. The areas are first photo-documented and then swabs are taken and preserved. The entire body is scanned. Also, control swabs are taken from the areas without visible stains.

All the surface areas such as the scalp, auditory tubes, nostrils, skin folds, armpits, spaces between fingers and toes, and behind the ears must be scanned. Foreign hairs and fibers, fingernail scrapings or cuttings should be collected as evidence. Similarly, the examiner should carefully examine the oral cavity for any insult. Two swabs, one from the tonsillar fossae and the second from behind the upper incisors are taken especially when forcible oral copulation is claimed.

Examination of genitalia is of prime importance in a sexually assaulted victim. A drop sheet is placed underneath the patient during examination and all the material is collected that falls on to the sheet. At the end, pubic hair is combed, and the sheet is folded and labeled with pertinent information to send it for criminalistics lab. Crusted secretions or other materials attached to the pubic hair are clipped out and preserved for evidence. About 20-30 samples of patient’s own pubic hair are collected as control. Wood’s lamp is used to collect semen samples from the external genitalia and enough swabs are taken as evidence.

Microtrauma can be detected using colposcope as it offers sufficient lighting, magnification and photographic capability. The labia minora, posterior fourchette, and fossa navicularis are the important regions which sustain injury during penetration. The vagina and cervix can be visualized and examined with the help of speculum. Swabs are taken and wet mount slide is prepared for examination. The perineum and anus are also important sites for determining microtrauma. 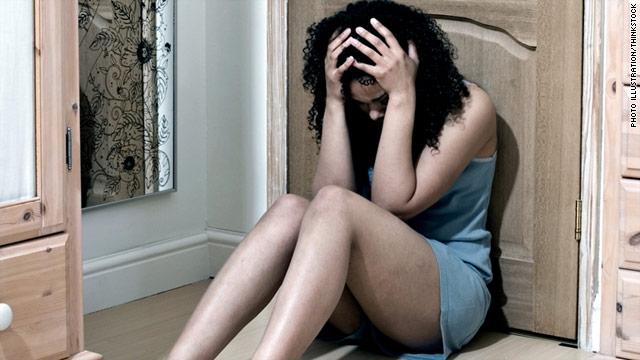 In order to collect the evidence, collection kits can be produced with the available materials e.g. boxes for storage and transportation. Collection kits are standardized on a jurisdictional basis. Thus, each hospital should have standard forensic protocol in accordance with jurisdictional crime lab.

Many times, the body is found to be the only crime scene. Digital photography of the scene and fluids helps to collect and document the evidence. Four images of each finding is considered good practice i.e. overall shot of body, medium shot and two detailed shots of the finding. The American Board of Forensic Odonatologists Number 2 (ABFO No. 2) scale should be used in two detailed images. To minimize the confusions, camera plan and body surface plane should be parallel with neutral background. However, photo documentation may fall victim to various extreme errors such as: 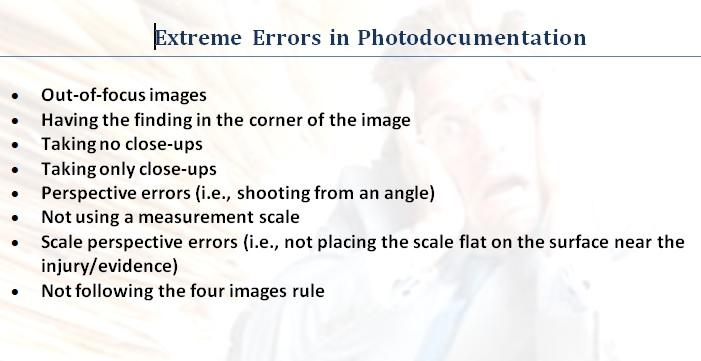 No doubt the evidence preservation, collection and documentation process for the purpose of forensic proceedings is a cumbersome activity. However, it is vital to offer justice to the victims and to prosecute the perpetrators. Once, forensic investigation was not considered as a part of health care services. Now, forensic nursing and forensic examination training for health professionals play a role of bridge between health care services and legal arenas.