Domestic violence (DV) is a term used to describe many violent relationships such as child abuse, elder abuse and sex abuse. However, it is most commonly used for an intimate relationship between two adults where one partner uses a pattern of assault to exert power and control over the other partner. At present, DV is one of the major public health issues. It not only includes physical violence but also refers to psychological, economic and sexual abuse along with attempts to isolate the partner. For complete understanding of domestic violence in our system, it is helpful to review some historical points like:

Regarding domestic violence, laws vary country by country. A fixed law has been established in US, but it is not the case in many developing countries. Social acceptance of domestic violence also varies among countries. One of the UNICEF survey shows that the percentage of women (aged 15-49 years) who consider that a husband can hit or beat his wife under certain situations is:

The old rule stating “men have a legal right to use violence to discipline their wives” was removed in the US and many European countries in late 19th/early 20th century [1].

What is Domestic Violence?

According to the Convention on Preventing and Combating Violence Against Women and Domestic Violence:

"Domestic violence shall mean all acts of physical, sexual, psychological or economic violence that occur within the family or domestic unit or between former or current spouses or partners, whether or not the perpetrator shares or has shared the same residence with the victim."

Family violence is described as:

"Physical, sexual and psychological violence occurring in the family, including battering, sexual abuse of female children in the household, dowry-related violence, marital rape, female genital mutilation and other traditional practices harmful to women, non-spousal violence and violence related to exploitation.”

"Domestic violence means any act of violence, even if only verbal, perpetrated by a household member upon another household member and includes any omission which causes physical or moral harm to the other."

According to The US Office on Violence against Women, DV can be defined as:

"Pattern of abusive behavior in any relationship that is used by one partner to gain or maintain power and control over another intimate partner [2,3]”.

Incidence and Prevalence of Domestic Violence

Followings are some facts regarding statistics of DV:

Figure-3: Homicide rate in the U.K. evolved during the last decades (Source: www.filipspagnoli.wordpress.com)

Causes and Risk factors of DV

Following individuals are at risk of DV:

Figure 4: Domestic Violence in the form of acid throwing

The causes of DV include:

It is one of the major causes of DV, and occurs in situations like:

DV can be classified into various types [8-10]. These are:

Physical abuse- it may be in the following forms:

Psychological abuse- it may be in the following forms:

Emotional abuse- it may be in the following forms:

Signs and Symptoms of DV

You should identify the following signs and symptoms of DV in a domestic violence survivor:

The following physiological symptoms can be observed during the assessment of DV:

Pattern of physical injuries- these may be:

Centrally placed injuries- such injuries include bathing suit pattern, which initially involve breasts, body, buttocks and genitals. These areas are usually hidden areas, covered by clothing. Other central locations include head and neck.

Defensive posture injuries- like injuries to medial aspect of hand and forearm, bottoms of feet, back, leg, buttocks and back of head

Injuries with many stages of healing- such injuries may be present if there is history of ongoing violence [11,12]

The features of violence injuries may include:

No injury physical signs and symptoms- these sign and symptoms can be observed in the individuals experiencing ongoing abuse. Some of these complaints include:

Health care providers must routinely screen women for DV. Screening is very important and effective way of detecting DV as it increases the referrals to community resources thus improving the quality of life by preventing the DV related injuries. Screening is performed with a questionnaire filled out by patient or a direct interview carried out by health care provider [13-15].

How to screen a case of DV?

A health care provider must apply the following steps to carry out the screening of DV-case:

Management of the case of DV (How to Help Battered Women)

One can help an abused person (woman) by following the 5 aspects of care. These aspects include [16,17]:

Identification of the suspected case of DV

How to Ask About Domestic Violence?

Interview the patient in privacy on her own, away from anyone who may have accompanied her. Ask the first two question of WAST screen. These questions will indicate if she has been abused or not. After these two questions you can ask the remaining questions of WAST screen to get complete information about violence. Examine the patient to find signs and symptoms of abuse. During asking these questions follow the following rules:

There are many types or forms of domestic violence and this guide helps you to interview under different circumstances of abuse.

Examination and assessment of the patient

The signs and symptoms of domestic violence of various types have already been described. Keep them in mind and then examine the patient and assess the type and severity of injury [16,17].

It is necessary to document the following essential points regarding DV:

As a health care provider, you must deal with the woman’s safety. When you are finished with the examination regarding the violence, support and help her in planning for her safety once she leaves your office or health care center. You can report to legal agencies if the patient is in danger [16,17].

A health care provider the battered individuals with a short list of local resources. The list must be printed on a card that can be easily folded into a small size card, thus keeping it out of sight [16,17].

There are many steps that can help to prevent domestic violence. Following two tables describe some of these steps in a comprehensive way: 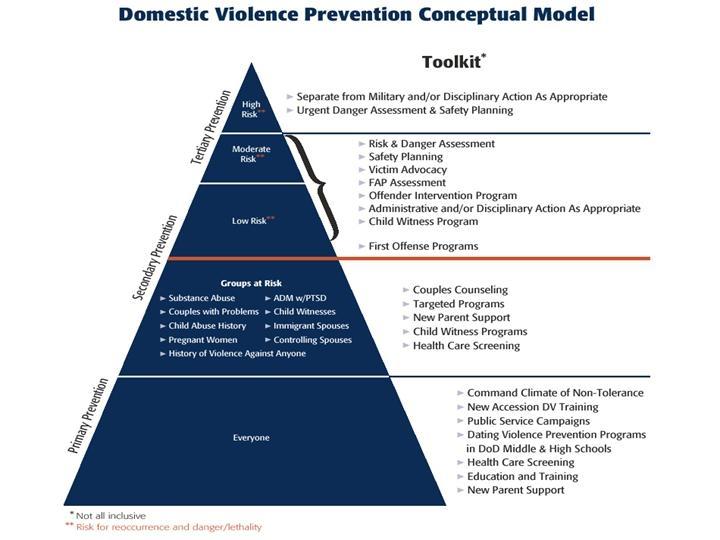